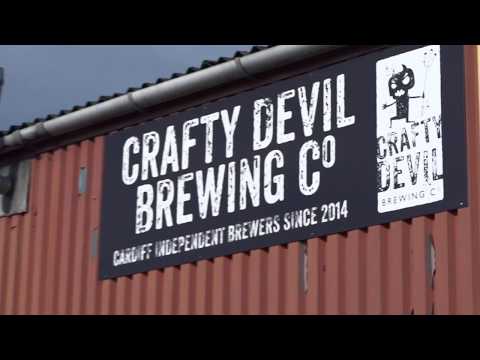 So, yeah, we’re Crafty Devil Brewing, Cardiff We started in a garden shed so we started really small and now we’re getting to stage where we’re brewing two and a half thousand to three thousand litres a week and selling a lot of beer so at total capacity in this unit now

So next stage really is expansion from here, a new Brewhouse, really Just to give us that capacity so that we can grow on further The way brewers have always run in this country is actually running their own venues The Crafty Devil Cellar is our first, nice, small bar and bottle shop Straight away, though, IT was massively important

Card payments – you’ve got to take card payments these days You can’t run a business on cash only and to be honest, I would never want to I mean, we’re now roundabout 70 per cent card, 30 per cent cash, and that’s the way the trend’s going Starting really small in our shed, we didn’t really need massive IT systems so we were paper-based, off Excel spreadsheets, off Word documents, PDF-ing everything But as we grew, very rapidly, that’d become just unsustainable

What we switched to, about three years ago, was based in the cloud Everything runs off it, so all our invoicing and we can really manage our cash flow through that Like many businesses, we’ve got a website which is basic for us, it’s a landing page We need to do some more work on that website as we move towards maybe doing some more online sales, that sort of area But, for us, the growth has always been social media

Our Twitter account, our Facebook, are the first things we did, even before brewing the beer We’re too small to have maybe a dedicated social media person We all pitch in with that But we found a tool recently called ‘Later?’ which allows you to post later basically, so you can schedule posts Over at the Crafty Devil Cellar, we’ve got Sky Sports so what we tend to is at the beginning of the week we’ll look at the schedule, see what’s going on and we’ll put posts out on those days

So, within the beer and cider trade there’s a probably a bit of a niche social media platform It’s called Untappd It’s allowing our customers or customers of breweries to actually log what beers they are drinking and they can rate them if they want But we’re also allowed to keep abreast of what’s going on in the market so we look at what style of breweries is coming out or who’s making what, what’s really popular, what’s the in beer this year? One thing we do is email marketing, not massively, we don’t just send out stuff randomly We’re really using it for our trade customers

So it allows them to see on a Monday morning what we’ve got in stock that week or what we’ve got in stock coming the weeks afterwards so people can reserve We can use set templates, it looks good, you put a link on it But the other great thing about MailChimp is the management side of it as well So, we know who reads our mail so then can target when we do our telesales and ring those guys and say oh, we noticed you opened the email this morning are you interested in anything? It kind of gives us warm leads I recommend Superfast Business Wales to any business in Wales because it does help

Even if you think you’re proficient in social media, it gets you to a level and if you’re going to do any social media at all, it’s really helpful to get you started but it took us to the next level really and I think that’s something all businesses should look at We’ve never had any money, any marketing money, everything we’ve done is built on social media and that’s exactly where our growth’s come from Ten years ago I don’t think we could have done the growth we’ve done today So, we’re talking about 13 – 1

4 million pound business within five years in the city We do have UK distribution as well and when we speak to customers over the bridge, they want Welsh beer It’s a sign of quality for them

The uk best and most popular dating online sites without pay