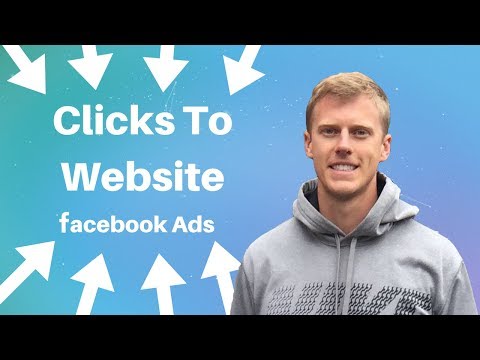 What's up guys Jason Wardrop here and in today's video I'm gonna walk you through how to set up a Facebook ads campaign using website clicks So you can get more traffic more people over to your website your blog wherever you want and also be able to generate more leads for your business right so really if you're gonna go for leads right the reason why you want to do this over a Conversion campaign is because Facebook They've kind of recently come out and said hey if you're not getting at least 25 to 50 conversions per week or 25 to 50 leads per week you're probably better off Just setting up a clicks to website Campaign all right, but if you're just going through and you're just like hey, I've got my blog I've got a blog post or I just want to send people to my website or just some other page of yours on your website Then it's also really good to use clicks to website, so let's just break it out I'm gonna go through and show you guys this you guys have any questions as I'm going through this just comment down below I'm really good about responding to every single person's comment question whatever you might have and if you guys are brand new to the channel Feel free to subscribe because we launched a new video every single day on how to generate more leads Make more money and grow your business right so right here in the Facebook Ads account We're gonna Do is come over here to create campaign and? Right here guys

It's gonna Say What is your marketing objective? Okay? So for this one 4 clicks to website We're gonna want to choose traffic Okay, and as we talked about in other videos, and if you guys have never watched one of my videos each one of these objectives Facebook knows like Facebook has so much data on all the users on Facebook, right? so they know which people are more likely to watch a video or more more likely to go through and click to your website or More likely to go through Become a lead or like or comment on a post so what we're gonna do for this one is we're gonna click on traffic Right here, okay, so now we can come give it an able to say we'll see actually traffic demo And then we'll hit continue here, okay, so now what we're gonna Do this is this is your absent name so this is getting into the targeting so now We've already set basically told Facebook Hey, we want a clicks to website campaign so so basically We want you to showed this ad to people that are more likely to click through my website my landing page my blog Whatever it is You're trying to send them to all right So we come down here

We could give us a name we could say test Demo just because a demo right here, then we come down, and we just choose our normal audience, right? So we're gonna choose our normal audience We're gonna choose our daily budget and this right here optimation Optimization for ad delivery, so we've got link clicks landing page views impressions and daily unique reach Right now you might be thinking yourself Well Jason What is the difference between link clicks and? Actual landing page views okay, and there's actually a huge difference, and if you don't really understand the big difference here it can actually Cost you quite a bit of money here Okay so right here link clicks That is if your ad is shown to somebody on Facebook like they see it in their newsfeed the right-hand column, whatever And they click on the link, okay? But sometimes what happens is they've got a bad internet connection or they're on their phone, and they just got bad like LTE's bad It's not working their data and all that stuff, but if they clicked on it And they go to the page or it starts pulling up starts loading the page But it doesn't fully load and the eggs out of it before That counts as a link click ok so so Facebook is basically gonna go and optimize just four clicks on that okay So every single time that somebody clicks on it You're gonna be charged okay whereas with this landing page views He's taking it the next step deeper

Okay, so you've got link clicks They click on your post, but then this means that you're actually your landing page actually pulled up And it was loaded so it wasn't like they clicked on it, and they've exited right out They actually bloated they actually viewed your page now doesn't mean that they viewed it for a long time But it's that next step in that whole process where they click it It actually pulled up it loaded, and they're viewing the page, okay, so Facebook's got a lot of data, so they're able to go through and optimize and say okay These people are more likely to not only click But also view the landing page and so when you click on landing page views here It's going to optimize and show it to you those types of people okay So what ideally what you want to probably test out is probably split test these two things Because sometimes you can get even decent results with link clicks Versus landing page views and these other ones obviously This is just more impressions Just getting as many people seeing your ad so that's called CPM or cost per impression They use they use em for impressions Because it's it comes from Latin the millah mi Li, which means a thousand so it's cost per 1,000 impressions, or you could say hey? just I want to optimize it for a daily unique reach right so if you're going through and running a Facebook Ads campaign for website for traffic link clicks and all that stuff I Would come in and I'd focus on either the link clicks or landing page views I typically like to go with landing page views because that means they actually have pulled it up and they're looking at my page Okay, where's my blog landing page? Whatever it might be? That's that's really big there so as far as this other stuff goes I just wanted to hit this really quick because as far as your targeting This is gonna be different for every single person on here depending on what type of campaign you're running Whether it's for your real estate business fitness blog whatever it is right, but I just wanted to hit really quick how to set up a website traffic campaign and then going down here because this is a fairly newer feature of optimization for the ad delivery So I just want to hit that and so you guys kind of know the difference there And then your budget your placements like now also guys Just really quick I used to just do edit placements and just do the Facebook news feeds But now I'm kind of testing out a little bit more with all placements okay because Facebook's getting a little bit better with having all of the the different placements and targeting the right people and so you're able to go through and hit a lot more people and a lot more frequently and Then you can actually go through and see which placements are performing the best in your ads later on so we'll probably do another video on that because that's kind of powerful and So you can see like okay? It's really working well in the Instagram newsfeed or Facebook newsfeed or on You know audience Network or whatever it might be and then you could just kill off and cancel the ones that are not Working that well right so anyway guys leave a comment down below if you guys have questions on any of this Also, you know if you liked it give it a thumbs up It was helpful and If you guys want new videos like this every single day on how to generate more leads make more money and grow your business make Sure you subscribe to the channel Because we launched a new video every single day at least we try we do our best and we will see you all tomorrow

Start using Paid Advertising for a Happy New Year for 2018