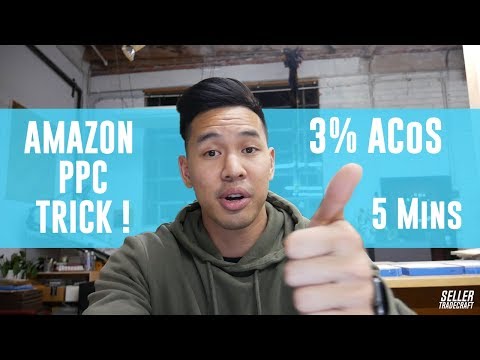 (whooshing) (popping) (dings) – Yo yo yo What's up guys? Anthony Bui-Tran here

Welcome to another great episode on Amazon PPC, we're Seller Tradecraft Welcome to the channel And if you guys haven't checked it out already, right before I went to the gym earlier I made this video about Amazon ACoS, right? Amazon ACoS is definitely an important metric that every Amazon seller needs to know It's super important, and if you don't know it you're probably not, ya know, you're probably new at Amazon, and it's something that you should definitely know more Especially if you don't know how to calculate, if you don't know what your break even is on it, and how to like really understand what ACoS is and what to do if it is high or low, right? So go ahead and watch that video if you haven't already

But yeah, other than that I'm shooting this video here in Los Angeles, California Staying at my friends place in downtown LA, Nick and Fernando, they're eight figure sellers I'm being mentored by them and they're gonna be my ticket on how I scale from like the seven to the eight figure mark, right? I'm, I just kinda got stuck and I realized I need some mentorship I need some like advice on how to get to the next level So yeah, stay tuned Nick and Fernando, they're gonna make some videos on this channel too and we're all gonna work together, it'll be a lot of fun

But yeah, and we're coming off private label course that's gonna come out in like a few weeks time and everything so stay tuned for that Sign up for our e-mail list first to get pre-exclusive discounted access to all of that But other than that, let's get into it Lets talk about the one Amazon PPC campaign that every seller should have, lets go Alright so when it comes to Amazon PPC, there's a lot of ways you can really go about it

But what I wanna talk about today is the one campaign that every person on Amazon should be running, all right? I don't care who you are, if you're doing RA, wholesale, OA, private label, all of us should be running this, all right? And, what is it? It is an auto campaign at a five cent bid, and a daily budget of $20, right? With a daily budget of $20, at this low of a bid price with an auto campaign, you're more than likely not gonna spend your whole daily budget on this, right? So why do I recommend this though, right? Let's look at my numbers and it'll speak for themselves Looking at this screenshot right, look at that I've had a three percent ACoS since I've been running this campaign Most likely, everyone watching this video is happy with a three percent ACoS If you're not happy with a three percent ACoS then I think you've got more problems than yeah a lot of problems

(laughs) If you got–if you're worried about having a three percent ACoS, that being too high But like I said, it's a super super simple campaign to run, and it only takes five minutes to set up Literally any Amazon seller can go set this up All you have to do is, go in your campaign manager, add every single product that you have into this one auto campaign, and just run it, like I said at a $20 daily bid, $20 daily price, right? And then set the bid to five cents, right? The bid cost is so low that you are more than likely never gonna have like, a really high ACoS and whatever accidental sales that Amazon auto campaign gives you, you're gonna have really good ACoS' off those, and it won't hurt, trust me So I do this for all my products

Is one of the tips that I learned like, in the very very beginning of my Amazon career And I just wanted to share it with you guys, my audience right? Like I said, this works for anybody selling on Amazon, it doesn't matter if your doing RA, OA, wholesale, private label So definitely go test it out right now It takes less than five minutes to set up, it's gonna improve your sales and make you more money So yeah, other than that, thanks for watching guys

I'm super hungry, my stomach is growling, alright? I just got back from the gym so I'm gonna go eat and everything But yeah, let me know in comments below, like how this turns out for you Let me know if you're about to go set up right now, let me know if it takes less than five minutes, right? And if you enjoyed this tip, give me a thumbs up, alright? Subscribe to my channel and, you know it helps, because I wanna know, you know, when you guys leave comments and you guys leave me thumbs up it helps me know that you guys enjoy the content Makes me wanna produce more content and I feel good about it at the end of the day So other than that, peace out, I'm Anthony with Seller Tradecraft, thanks for watching