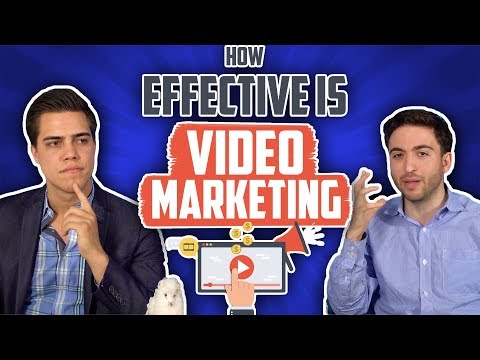 So anyway, (laughing) On today's Viral Ideas show we're gonna basically talk about how effective is video marketing I know Dave, you get asked this mostly all the time – All the time – You're out in the force, so, how effective is video marketing? – So the first thing I like to go over with everyone when they are considering video marketing is that by 2019, 80% of the world's internet traffic will be video And today, in 2018, you even see it with the platforms prioritizing video

Facebook has Facebook watch, it's the center feature on their app, and when you're scrolling through Facebook predominantly you're seeing videos as a majority for the posts Twitter is integrating video, LinkedIn is integrating video, people are watching more and more YouTube So, as a digital media and as a digital transform, people are watching more video from their phone So as a company, if you're not getting in front of people using video, you're missing a huge window of opportunity, especially being early in the game to invest in it – So as far as you say, missing out on opportunities, I know a big thing with us is the sales force

How can you basically take one video and turn it into thousands of viewers? And I know you talk about that a lot – Yeah, yeah, yeah When you think about, even if you are just like B to B or B to C, you definitely have to have people out there, you have to have pieces of content out there acting as your foot-soldiers, your boots on the ground If you're using the top funnel, mid-funnel, and bottom funnel approach to doing marketing, essentially you can have different videos out there on the internet and using targeted advertising, using your website, and using those assets, you're actually able to move people through the top of the funnel, the middle of the funnel, and bottom of the funnel using video You're able to increase your watch-times over time and essentially build a living, breathing sales force that never quits on you, that's there 24/7

For example, this video that you are watching is going to be on the internet until we take it down, which I don't think we ever will, it's a phenomenal video, and Ben the llama is in it and we want to remember Ben the llama forever It is something that exists forever and it's something that you can use to sell your products and services and, more importantly, provide value for your end audience – Basically, you're telling me that it's an asset, right? It's going to be sitting there and it can be viewed no matter if it's nine to five or after five o' clock So, it's going, – Exactly – To be working around the clock for us – Working around the clock

And it's convenient for your end consumer to watch a video If they want to get a piece of affirmation, they want to get it fast, and they want to know something specific, having that library of content out there that it's easily accessible when the person needs it specifically in the buying process, is key – Awesome, awesome – So, I wanted to make one more point before we put Ben the llama back in his cage because he's starting to get a little grouchy You know what I mean, he gets a little, – Oh yeah, definitely

– At this time of night (laughing) What would you say is, in your opinion Zach, is a good way to distribute video content? We talked a little bit about the funnel, but how do we see our clients doing this at this point in time? – For anybody that doesn't know about the funnel: awareness, when they become aware of you Consideration, simply explained, if they are considering your product, your service over another, or even maybe your product versus your other product or your service versus another service you offer And then, ultimate decision is, they already know about you, they already know about your values and everything like that, but what's the last thing that you need to get them over the edge That's awareness, consideration, decision

As far as a cost effective distribution method we really advocate for our clients to put them up on all different platforms to really get the best use out of them But it doesn't mean that you take one specific video and you just say, "Alright, this is it, "I'm going to put it up and it's done" Really, what we advise on, if it's on YouTube, definitely put the whole video, make sure it's properly tagged, common things like that Also, transcribing it Make sure its transcribed

90% of people, I know on Facebook, I don't know about YouTube, do not actually listen to your video, they just read along to it But another thing to really be cost effective is back to just taking that one video and using it on tons of different platforms to get the most use out of it is: break it down a little bit If you want to put in little snippets on Facebook to capture people's attention, whether you use them on Facebook ads, posts, things like that I also see people breaking it down as far as on Instagram Instagram stories is really great right now, getting a lot of use out of that

Basically you have 15 seconds you can cut out of any of your videos and put that on your Instagram story And if you want to put it on your Instagram profile, for example, that's one minute You can really distribute your videos, your one video, into so many different mediums and methods and break it down so that you can get the most value out of your one video Back to cost effective, let's say you spend x number of dollars on one video, as long as you distribute it against all different platforms you're really going to get the best use out of it – Exactly, and especially with the way Facebook ads are right now, you're distributing it out on Facebook or YouTube even and running those advertising dollars against your actual video, you're going to get the maximum exposure to the proper audience that you want

– So what are the key take-aways from this video? – The key take-aways, some stuff we went over, everyone is doing it, by 2019, 80% of the world's internet traffic will be video Video could be your 24/7 sales force, it's out there, it's working for you even when you're not working It's a very cost effective way to run content, whether you are distributing it on Facebook, Instagram, Twitter, LinkedIn, it's a great way to get your content out there to your end audience Thanks for watching, we appreciate you watching the Viral Ideas show (upbeat music)