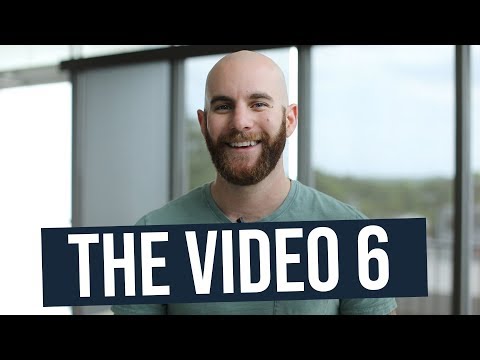 – Do you feel like every time you start a new video project you're basically starting from scratch? Or if you're reviewing content that somebody else has made for you, do you find it hard to clarify why it's not good or what could be fixed to make it better? Well, in this video I'm gonna show you a super simple formula that if used properly is gonna radically improve the quality of your videos and also cut your production time in half (upbeat energetic music) Hey guys, it's Zach from IMPACT

So glad you're here to spend some time with me today You know I really feel like at times we over complicate the video process I think maybe we're under the impression that it takes some sort of super natural, creative talents or ideas to create awesome videos that really connect with our customers and our prospects When in reality, it's actually not that difficult and it can be broken down into a very simple, step by step formula which I have done here and we've named it The Video 6 And it is six steps that if followed from beginning to the end of a video will likely guarantee that it's gonna be a cohesive message, that you're gonna educate your customers, you're gonna create better relationships, you're gonna get those marketing results that you want

It's a phenomenal thing that's super easy and you've actually already been watching three of those elements already in this video Can you guess what they were? Well the first one is called the teaser The teaser is the first 10 to 30 seconds of a video in which you've gotta really capture the viewer It doesn't matter how great the production value is or how great the content is in the middle of your video if you can't get them past that first 10 to 30 seconds, well it really doesn't matter I've actually created a video with two teaser formulas you can use to create really great and just interesting hooks that are gonna grab that viewer and explain why they should stick around

If you wanna watch that video you can click right here and go and watch that Now the second element of The Video 6 is called the logo bumper and we've all seen these before even if you don't know what it is or didn't call it that, you've likely seen it before Generally these are just motion graphics that include our logo and they brand the video and give it a certain production feel like this is gonna be produced piece of content It just kind of sets an expectation Logo bumpers are really easy to make

You can even buy pre-made ones that you can customize from places like videohive and envato studio I'll put some links in the description that you can quickly get to those Don't over think this, don't over complicate it, just make a quick one that can be reused over and over again Now the third element of The Video 6 is the intro Now I know what you're thinking, what's the difference between the teaser and the intro

Well here's the deal, the teaser is more to grab that viewer and quickly explain why they should stick around The intro on the other hand is the point in which the subject of the video or the person who's in the video is going to introduce themselves and introduce the content At this point you're gonna elaborate a little bit more about what's in the video, this is kinda gonna be a spoiler If you do it properly, you should explain exactly what to expect and simplify it for the viewer so they really have a reason to stick around You can use this opportunity to get buy in too depending on what you're talking about, you might wanna clarify why you're talking about your particular subject or why it's important to them

The intro's a really great spot for this and it's also a great spot to introduce your segments Have you ever been watching a longer video that's got no breaks in it? How did you start to feel as that content progressed on? Did you start to get bored, uninterested, you kinda started zoning out, thinking about what you're having for lunch, looking at those suggested videos on YouTube? All of these things happen because our brain hasn't really had the chance to digest the information yet Segments are crucial for two reasons One, we're gonna improve view duration It's gonna be easier for your viewers to stick with you and keep up with what's happening if you divide everything out into separate segments

It's also going to improve recollection If you're trying to really educate your customers and teach them it might be five things or it might be a how to or whatever, keeping things step by step or just breaking them out into bite size chunks is gonna help them remember exactly what you talked about So segments are absolutely vital They're one of the most important parts of The Video 6 Once again, they increase view duration and recollection so use segments whenever possible

Now on to our fifth element of The Video 6 and it is the call to action What's a good marketing and sales video without a good old call to action, right? The idea here is that there will almost always be a next best step that the viewer can take after they're done watching the video or once you've armed them with this information, what is the next thing they should go and download or the next thing they should go research or even just now that I've taught you this thing, go out into the world and use it and be a better person for it Who knows what the call to action might be but it's important to be specific, exactly what they should do next and why they should Use visual cues to show what that thing looks like if it's directing them to a certain page or a certain video, show what that page looks like, show what that video looks like, where they can click on it Then finally just be helpful

The idea here isn't just to give 'em something to do The idea is that what's the next best thing they can do now that they've got this information And finally the last part of The Video 6 is the outro Now this is the last opportunity to leave your viewer with a positive feeling so you gotta make this one count Sometimes it can be your slogan, it could be your call to action, it could be a funny one liner

I mean whatever you want it to be but just make sure that this thing, you really make it count You leave that viewer with a positive feeling If it's on YouTube, you can ask them to subscribe, like the video, much like I do in these videos Whatever it is, just smile, give your salutations and leave the viewer with a great feeling So that's it, that's The Video 6

It's literally that simple You've got your teaser, your logo bumper, intro, segments, call to action and your outro You're not gonna use all of these all the time but if you use some of them in conjunction, you're gonna take some of that guess work out of your videos and start to create really great content, build those relationships, get your marketing and sales results, help out your viewers, educate them If you'd like to download our free Video 6 script template, I'm gonna drop a link in the description below You can go in there and drop in all of these elements

It's already formatted with all six of The Video 6 I hope this is very helpful guys If you enjoyed it, please hit that like button below and if you haven't done so already make sure you subscribe to Film School for Marketers and until I see ya next time guys, keep learning (gentle upbeat music)