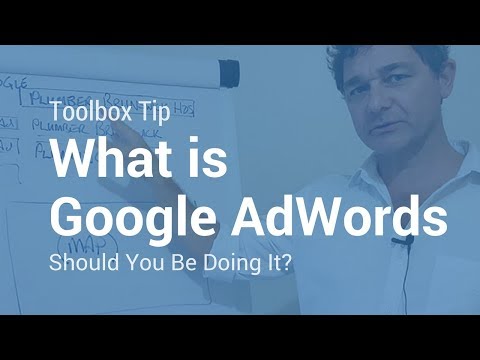 A Pay-Per-Click Ad It's called that because you pay every time somebody clicks your ad You put an ad and you get to decide when your ad shows based on the words that people type in the search box Someone might type ‘plumber Brunswick Heads’ and you can have your ad show up there when someone types that And if they click on your ad, you'll pay the money

Now, it can be complicated You can waste money easily and you can misdirect your funds so I don't propose that you do this yourself I'm Jon from Small Fish Business Coaching I help my customers decide how to invest their marketing money or how to invest their marketing money to get the best return Investing in Google AdWords isn't always the best choice

Certainly, I don't recommend a DIY approach, just like you probably don't recommend a DIY approach for building a house or doing a qualified tradesman job I recommend that you engage an AdWords specialist to do this for you What I do with my clients is: I help brief them and get it right so that they've got a proper brief and so they understand your marketing We direct a strategic campaign, not just shooting from the hip For some people, AdWords is great but it's not for everybody

If you serve a mass market like consumers or small businesses, AdWords is probably for you, particularly if you serve a mass market and you do smaller jobs rather than larger projects If you’re a subcontractor or builder, or if you're a builder and you work with architects, I don't think people are using that flow You’re probably better off to be contacting builders, or architects, or property managers directly But if you’re an electrician, plumber, fencer or something like that, this flow is very appropriate for you This is the flow of behavior from your customer: They have a need

It could be a county It could be an area, a location specifier And that's the thing You don’t know what they're going to choose They have a need, they know which trade they want

They search on their phone, usually on their computer in Google, the trade name and the location name comes up on the search page, which I've drawn out for you on my high tech flip chart I'll explain that in a moment They choose one and click on it based on what's written on that search page and they either click on the ad and go to your website or your landing page Or they click straight to call and make a call There's a number of things going on

Once they get to your landing page, they decide whether to call you or enquire on your website of course It's a bit complicated We've got this flow Someone with a need searched something They get the screen, with ads at the top

They helpfully say, “This is an ad” There's the map There's what we call the organic listings below I'll explain what each one is Ads are the ones people have paid for, usually there are 3 or 4

Google says that 70% of the clicks with commercial intent add up on an ad, which makes sense What that means is more people who want to buy something will click on an ad, which makes sense because if there's an ad there, you know that they're selling the thing And usually their ad copy, the writing, tells you that they're selling the thing, so you know you're in the right place If you're wanting to buy something, I think that's a good place for trades If you're wanting to buy a trade service and there's an ad that says we do this, you're likely to get a click

Having said that, there's a map that shows people close by in the ads because you can pay to serve your ad They might not be close by, so this is quite appealing for people as well And then the organic listings is Google's view of the most appropriate website for that search phrase according to several hundred factors I usually say to my customers, “You want to be in all three You want to be here and on the map and high up there

You've got three listings on page one You're more likely to get a click and you're more likely to look credible that way” Of course, it costs money and time and not everybody is in a position to make that level of investment Let me talk to you about Google AdWords There are nice things about AdWords: It's instant

You can get your ad there Google lets everyone take a turn on who gets to be at the top of that page so your ads are getting shown Your money is getting spent Your daily budget is going to get spent so you're going to get clicks from people who searched If you write the ad properly and you choose your search words carefully, you don't waste that money

You get people who really are interested in what you're selling Components to a Google AdWords campaign: Keywords, Ads, and the Landing pages I'll go through them briefly Keywords – are what got searched I’ve said this a couple of times now Generally, we want to consider the name of your trade, and a location specifier and I think someone wrote in one of the comments on this Facebook thread: “If you pick London or Sydney, you'll spend a lot money for every click than if you try Brunswick heads, or DeeWhy or whatever

" The bigger area you try and cover, the bigger the competition and the more you'll pay for your click And the more specific you are, the less you'll pay for you click I think that people are increasingly typing their suburb, but not London If I'm in London, in Northland, I don't want to Google ‘plumber London’ and get somebody from South London who's going to not want to come I want somebody close to hand

And people have woken up to this now and aren't typing Sydney, or big city names anymore They're typing suburbs and location specifiers near home, more specific ones, so think like that Think of all the names for your trade Kitchen person, Cabinetmaker, Kitchen installer, Kitchen designer, Joiner All those plus names for similar stuff

They see a nice ad with some words that say, ‘Cabinet maker North Sydney, guaranteed fixed price quote, free quote’ whatever And you've got to write something there that attracts people to click on the ad Some of them you can call directly from the ad, so you want to entice people to make the call Don't just write, "We're plumber, we're kitchen maker: Tell them something nice about yourself and give them something that entices them to click

The last thing is where they land If they just land on your home page, that's one thing If you have a landing page, a separate page on your website that's consistent with what you said in the ad, you get more clicks for your money, so that's a good thing too I'm running a workshop where I'll spend half an hour on this, not four minutes And when I'm coaching people, I've got training videos that last for an hour each

There are 2 or 3 on this so there's more to it than I can get across in a short video I hope this helps If you can make it to my workshop, it's on 2nd and 3rd of June over here in Australia in Byron Bay It's $300 and there's a link on the screen there for you to click or to copy and paste into your browser if you want to learn more Apart from that, See you later